Would You Consider Sex A Loss to The Female Gender?
Skip to content 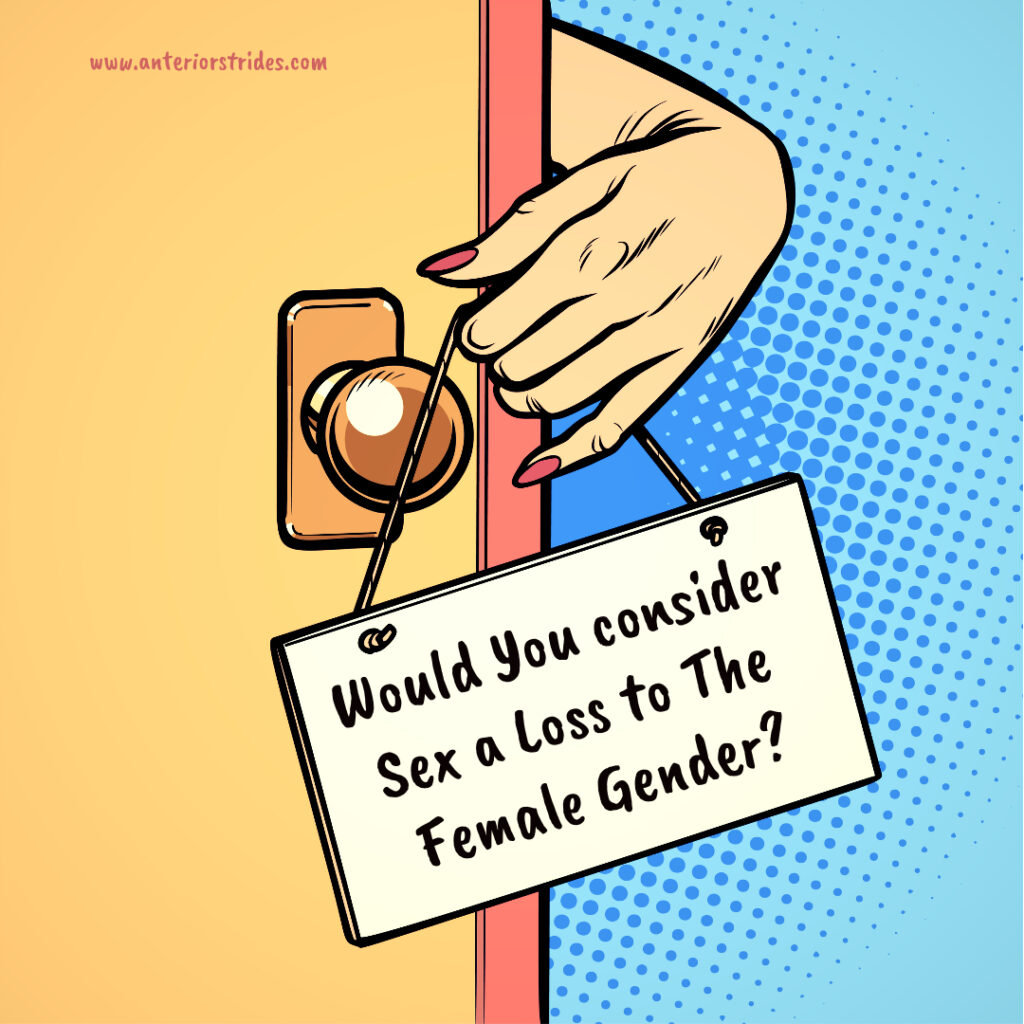 This is undoubtedly right. Dragging a fact does no one any good. A sexual experience cannot be fully harnessed if there is no “woman” in it. Shhhhh! I know the trite option that just brushed through your mind – the Homosexuals. Here’s a shocker; Feminity isn’t even a gender thing when it comes to sex. For the experience to be complete, there must be tenderness, softness and the warmness which can be felt, granted a feminine energy is present. Deliberately, brash sexual acts/compromises are not mentioned in this expose. Don’t give in to deep, wild imaginations. Resist the urge.

Women Rights and Its controversy.

Generally, the controversy on women rights creates a ‘review concern’ on the society’s perception of them. Absurdly, women are imagined to be weaker vessels and as such, incapable of making firm choices regarding what is available to them. The freedom of choice is without doubt, one right, sabotaged. Firstly, women OWN their sexuality and that’s a tool for empowerment. So, instead of pondering endlessly on what’s a loss for women or not, encourage empowerment at all standards for women. It is this autonomy that is capable of curbing the incessant and inhumane acts against women. Gender based violence, forced marriage, Female genital mutilation and various social limitations are on the rise because some women do not own their sexuality. Certain mothers do not also help matters. Well, it is because, they are ignorant of the personalised sacredness of a woman’s nature.

The world is progressing and thankfully, everyone is born with the ability to make choices; women inclusive. Except in an established state of coercion, which they are not physically built to restrain, there is a high tendency that females have more freedom to exercise their will in protecting themselves. Protection in this case, is a reflectional movement against what isn’t worth an involvement and subsequent attachment.

There Should be More Conversations on Sexual Issues.

To reduce the several misconceptions about women and their sexuality, more and more conversations should be initiated. This validates to that strong relationships be created by Family and Friends. It is the bond formed at the roots that reinforces self-esteem at all levels. (Bond with oneself, with family and with peers) Unfortunately, many women find it difficult to open up to those they are closely tied to because of the rigid nature surrounding their relationships.

Undeniably, there are triggers to the thoughts people have about women who engage in consensual sex. These triggers are traceable to the foundation already laid by some life’s primary institutions like – The Family. Liberal mindedness is somewhat a blessing, which many families have refused to associate with. It is only when there’s a liberty of thoughts and expression that you can make excuses not just for one gender only but two. Everything about sex doesn’t have to have connections with the cliché standards that have been set by people. Funnily, same people evolve. I don’t see why standards shouldn’t.

Gender Supremacy is a Mirage.

Yes! A mirage indeed. An illusion infact. There is supremacy, no doubt. Not one person can be equally matched with another -socially, mentally, emotionally. However, the idea that the male folks are made up of more supreme qualities than the females, is a blind assumption. None has the monopoly of unique strength. The earlier it is completely established and generally accepted that everyone operates at his/her own pace, the better. This is one out of the many ‘should-have‘ conversations.

The idea that a woman loses her pride or whatever the loss is, the moment she engages in a sexual activity with the opposite sex, is fallacy. It’s all a mind construct. Humans are of course, a representation of what they think. This knowledge should infact, be firsthand for the woman herself. No one bears a single moral entitlement to summarize the entirety of another person’s existence. None should, for imaginary supremacy, manipulate your perception of you. Woman,You’ve got rights. Real Rights. Right to negate and to affirm. Right to own you and Become. Life definitely has far gone beyond the old-fashioned and hackneyed sentiments showered on the topic – SEX!

3 thoughts on “Would You Consider Sex A Loss to The Female Gender?”